Global Index : Expanding the future of food, water and the environment.

The year 2015 will certainly be an epoch-making milestone for Kubota. This is because Kubota made a full-scale entry into the global market for large scale commercial farming in 2015. Kubota has long been supplying high-quality agricultural machinery to the rice cultivation market and has earned a very good reputation. However, dry-field farming, which occupies roughly four times the acreage of rice cultivation, had been virtually untapped until recently. Aiming for entry into large scale commercial farming,

Kubota has embarked on full-scale development of large tractors for the first time since the foundation of the company, and established a manufacturing base in France. Entry into large scale commercial farming with large tractors is actually the beginning of a new challenge for Kubota: solving the world’s food problems. “M7001 series” large tractors, born in France, will raise the curtain of the new history of Kubota.

Pleinchamp focuses on our Kubota M5001

Here’s a little memento from the 2017 SIMA that focus on the Kubota M5001 Watch the full video at Pleinchamp : http://www.pleinchamp.com/machinisme/actualites-machinisme/sima-tracteurs-m5001-le-pitch-de-kubota

Kubota made it to Terre.net ten most beautiful SIMA photos.

Terre-net recaps with images the 77th SIMA edition that just ended. Kubota made it to Terre.net ten most beautiful SIMA photos. Learn more about this : http://www.terre-net.fr/materiel-agricole/reportage/article/le-top-10-des-machines-du-sima-en-photo-213-125323.html 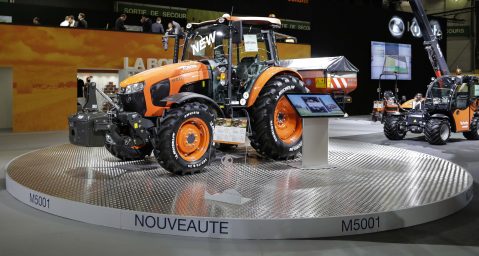 Watch the Agranet video interview of our M5001 product manager to discover this tractor’s innovations. http://www.agranet.fr/agranet/accueil/index.aspx?service=alaune&article=1924

Your message has been sent.